Block groups have been the de facto geographic measurement instrument in trade area analysis for decades. But extracting the most current population estimates within subsections of the nation’s 209,000 block groups has been difficult, if not impossible.

While most population estimating products simply spread population growth across block groups based on historical averages, an innovative product now brings a finer level of granularity to the process. STI: BlockPoint leverages the power of the nation’s over eight million block points to give retailers, grocers, restaurants, developers, and other location-dependent businesses, population estimates that represent true population changes within all U.S. block groups.

Just as STI: PopStats™ data gets its estimating strength from a unique calculation that combines the U.S. Census with residential ZIP+4 postal codes, STI: BlockPoint also gets its precision from the same methodology. However, STI: BlockPoint takes the population calculation one step further by allocating population growth to subsections within block groups based on actual changes. For example, if 1,000 people have moved into a block group that has ten block points, but 70 percent of the new residents have moved into only the southwest quadrant, STI: BlockPoint can identify those specific areas of growth and calculate both population estimates and growth percentages for them.

Ideal Solution for an Aging Census

STI: BlockPoint overcomes one of the leading trade area research problems of our times — the aging 2000 U.S. Census. One of the downsides to this decennial Census is that population growth has changed significantly since 2000. Today many previously low-density block groups are among the country’s fastest growing areas. Conversely, many areas that had large populations have lost residents. But even more relevant is that growth and decline has rarely occurred uniformly across block groups. STI: BlockPoint overcomes the disparity with its unique methodology. As a result, businesses gain another valuable tool at their desktops to more accurately assess population changes in new and existing markets.

1,000 Points of Data for Every Block Point

This add-on product to the STI: PopStats product both minimizes the challenges of expanding into high-growth block groups and maximizes the business opportunities that exist in fast-growing areas. And, just like STI: PopStats, STI: BlockPoint delivers today’s most robust range of quarterly residential population data. The product provides access to 1,000 fields of residential data, including households, incomes, home values, expenditures, lifestyles, transience, ancestries, and more. The robustness of this population data, which is unprecedented in the market research industry, is specifically designed to meet the varying needs of a wide range of businesses.

STI: BlockPoint delivers a finer-grained view of population growth and a more expansive range of quarterly population demographics than has ever been available before. Why not see STI: BlockPoint in action? Just tell us which trade area you want to test and we’ll send you a complimentary sample of the product. We’re confident that you’ll appreciate the fine-grained level of population-estimating precision this product brings to trade area research. 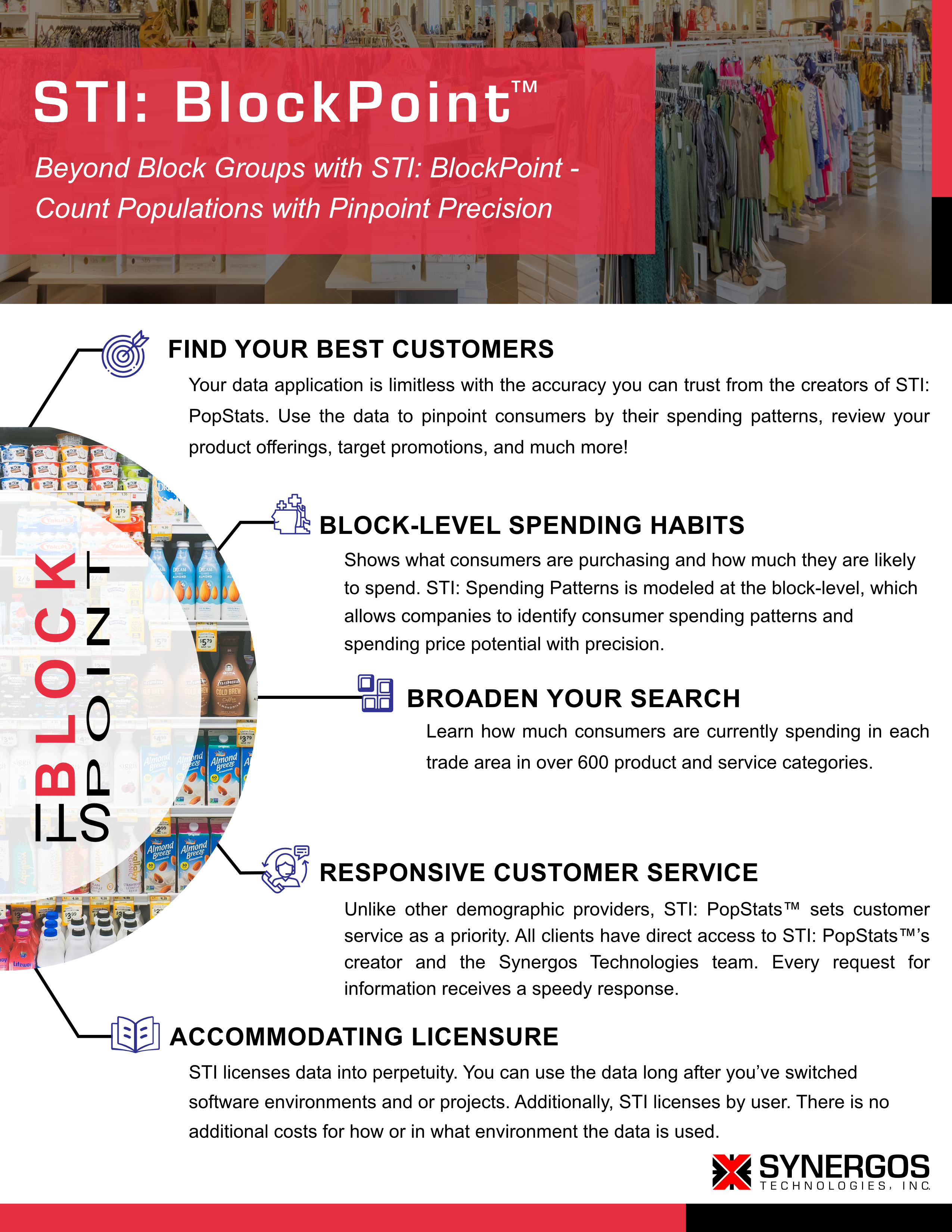 Unleash your research potential and enjoy greater confidence in your research — with today’s leading quarterly population and demographic data.